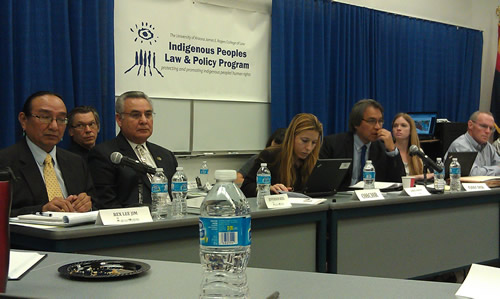 Last week, NCAI President Jefferson Keel delivered remarks at a two-day conference and consultation with the United Nations Special Rapporteur on the Rights of Indigenous Peoples, James Anaya.  Titled “The Significance of the Declaration on the Rights of Indigenous Peoples”, the conference was held April 26-27 at the University of Arizona in Tucson, Arizona, just days after the Special Rapporteur's meeting with tribal Leaders at the Embassy of Tribal Nations in Washington, DC.

The conference and consultation took place in the context of the Special Rapporteur’s official visit to the United States to examine the situation of indigenous peoples in the country, in light of the standards expressed in the United Nations Declaration on the Rights of Indigenous Peoples. In his remarks President Keel stressed the value of Indigenous cultural ideals to the improvement of the world economy.

“For tens of thousands of years, our people have been stewards of the environment. And now, non-Indigenous leaders are realizing that we are also successful stewards of our economies and societies. Indigenous peoples have been doing more with less for generations. It is clear that tribal businesses bring value to the table.”