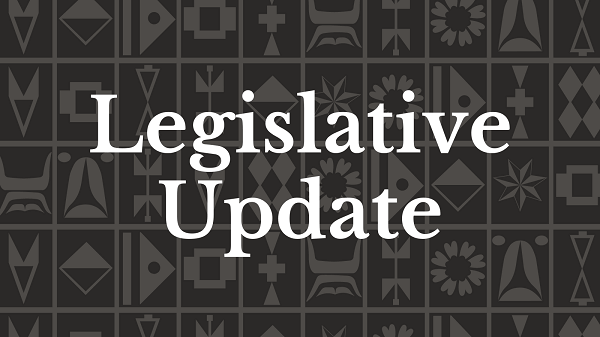 The House passed H.R. 6237, on November 16, 2020. This legislation would require the Veterans Health Administration to reimburse the Indian Health Service and tribal health facilities for healthcare provided to American Indian and Alaska Native veterans through contracts with other medical providers, also known as purchased/referred care. H.R. 6237 was received in the Senate and referred to the Committee on Indian Affairs for consideration.

On November 11, 2020, Senators Tom Udall (D-NM) and Lisa Murkowski (R-AK) introduced S. 4886, a bill directing the President to review federal agencies compliance with the Native American Languages Act requirements and make recommendations to improve interagency coordination in support of Native languages. S. 4886 would also authorize a federal survey of Native language use and language revitalization program unmet needs every five years. S. 4886 has been referred to the Senate Committee on Indian Affairs for further consideration.

S. 4909 - A bill to amend title 38, United States Code, to prohibit the collection of a health care copayment by the Secretary of Veterans Affairs from a veteran who is a member of an Indian Tribe

On November 18, 2020, Senators Jon Tester (D-MT) and Jerry Moran (R-KS) introduced S. 4909, a bill prohibiting the Department of Veterans Affairs from collecting copayments from American Indian or Alaska Native veterans for hospital care or medical services. S. 4909 is companion legislation to H.R. 4908, introduced by Congressman Ruben Gallego (D-AZ). H.R. 4908 passed the House on September 22, 2020. S. 4909 has been referred to the Senate Committee on Veterans Affairs for further consideration

On December 1, 2020, a bipartisan coalition of lawmakers from the House and Senate released a framework for a proposed $908 billion coronavirus stimulus package. The package includes a $160 billion set-aside for tribal, state, and local governments. Text for this framework is currently not available. NCAI will continue to monitor coronavirus relief legislation, advocate for the interests of tribal nations, and share timely updates as they become available. To review a chart of the proposed funding in the plan click here.