This paper provides an analysis of the President’s fiscal year (FY) 2016 budget request, highlighting impacts on funding for Indian programs. In the coming weeks, the President’s budget will be reviewed by Congress, and appropriations committees will begin holding hearings on the proposals. Overall, tribes have a significant opportunity to increase appropriations for Indian programs this year, and we urge tribal leaders to support tribal budget requests with direct communication to the Appropriations Committee and Subcommittee leadership and members in both the House and Senate. While the Interior Appropriations Subcommittees remain important, we encourage tribes to send testimony on the Department of Justice budget, which is handled by the Commerce-Justice-Science and Related Agencies subcommittees in both chambers, the Health and Human Services (HHS) budget handled by the Labor-HHS-Education appropriations subcommittee, Housing and Urban Development budget in the Transportation-Housing subcommittees, and energy programs in the Energy-Water subcommittees, for instance. The Native American Programs hearing deadline to request to testify before the House Interior Appropriations Subcommittee is February 13, 2015. Look up deadlines to submit testimony on the House side at http://appropriations.house.gov/.

The Senate will announce deadlines soon as well at http://www.appropriations.senate.gov/. Contact Amber Ebarb (aebarb@ncai.org or 202-466-7767) at NCAI if you have questions about this analysis.

Highlights of Proposed Funding for Tribal Programs: In preparation for the President’s budget, some agencies consulted with tribes about programs in the budget, and many recommendations from Indian Country are included in the FY 2016 proposal. Below are a few highlights from NCAI’s initial analysis of the President’s budget. Additional department summaries are addressed below, as well as links to many of the agency budget documents for even more in-depth analysis. In January of this year, NCAI released its FY 2016 tribal budget recommendations, which can be compared to the Administration’s budget proposals.

Significant proposals in the President’s FY 2016 Budget include:

The White House has also released a fact sheet on tribal programs in the FY 2016 budget, “Standing With Indian Country.” NCAI will work to ensure that the federal programs that fulfill the trust responsibility to tribes receive bipartisan support in the appropriations process. 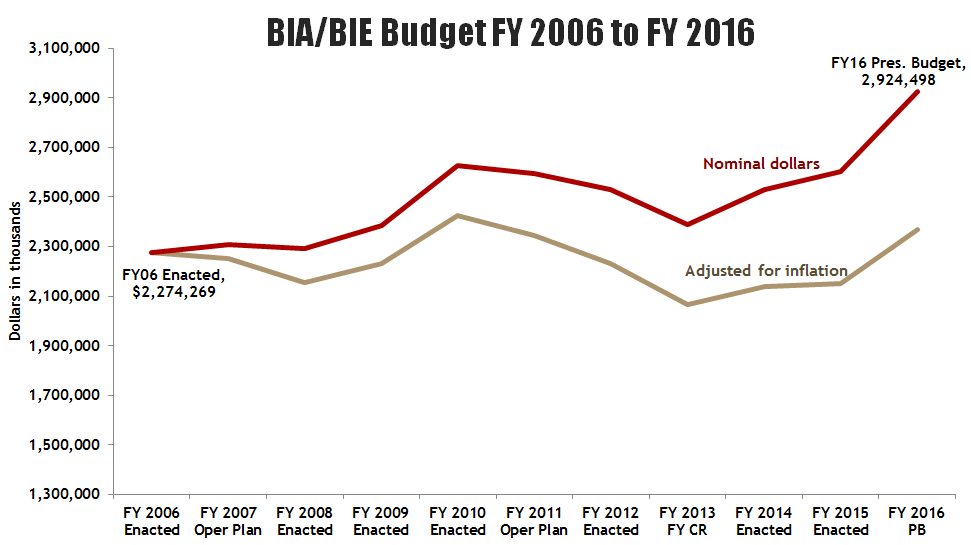