NCAI publishes a range of reports and analysis on a regular basis. Listed here you will find a listing of our more prominent and most recent publications. For policy papers and other analysis produced by NCAI be sure to search and browse the full set of NCAI Resources. 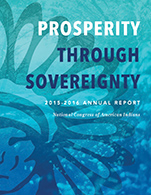 Browse current and past Annual Reports Each year NCAI brings together the leading national organizations and Indian Country advocates to outline the needed investments to strengthen tribal nations.  This Indian Country Budget Request provides the federal government with an outline for upholding the federal trust responsibility.

Learn more about the FY 2017 Indian Country Budget Request, Upholding The Promises, Respecting Tribal Governance: For the Good of the People. 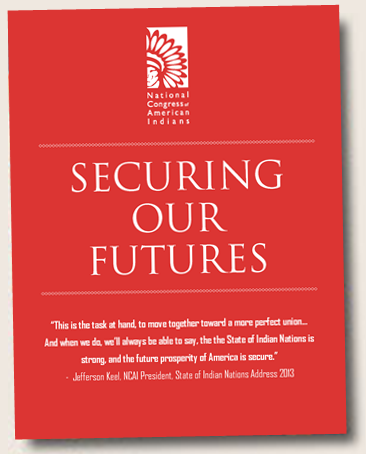 NCAI released a Securing Our Futures report in conjunction with the 2013 State of Indian Nations. This report shows areas where tribes are exercising their sovereignty right now, diversifying their revenue base, and bringing economic success to their nations and surrounding communities. The path to securing our future – from education to food security, climate change to workforce development – is illuminated by the proven success of tribal nations. While the circumstances of each tribal nation are unique, the promising practices contained in the report offer a way forward to secure tribal economies and sustain prosperity for future generations.


Investing in Tribal Governments
As part of the Indian Country Works campaign, to measure the impact of the American Recovery and Reinvestment Act (ARRA) in tribal communities, NCAI’s Policy Research Center released two reports in 2010 highlighting investments made through ARRA, the impact of those investments, and the continuing need that exists for tribal governments moving forward. 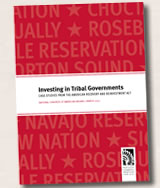 Investing in Tribal Governments: Case Studies from the American Recovery and Reinvestment Act

This report highlights a series of nine cases studies that profile projects being funded throughout Indian Country under ARRA. Developed through a series of interviews with tribal leaders, program staff and community members, these case studies convey the impact and potential of a broad range of federal investments in tribal communities. 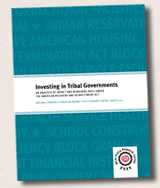 Investing in Tribal Governments: An Analysis of Impact and Remaining Need Under the American Recovery and Reinvestment Act

This report provides an analysis of the nearly $3 billion of wide-ranging investments made through ARRA in tribal communities across the country. While ARRA provided tremendous new opportunities for tribes, it also highlighted the continuing federal investment that is required for tribal governments to meet the needs of their citizens.

Although the White House Intergovernmental Affairs initiative and the Department of the Interior initiated and underwrote the National Native American Economic Policy Summit, the resulting policy recommendations and the subsequent policy report entitled Native American Economic Policy Report 2007 reflect Summit participant views and recommendationsand not necessarily those of the federal government.The recommendations and report are the direct product of a series of meetings with tribal leaders and other vested partners affected and influenced by Native American economic policy issues. The White House and DOI support the public dissemination of the report, but this does not in anyway imply endorsement for the recommendations or the report.