Get your Census Toolkit here: To ensure all American Indians and Alaska Natives were accurately counted in the 2010 Census, NCAI launched the Indian Country Counts campaign in 2009. Historically, American Indians and Alaska Natives are one of the most undercounted groups of any population in the U.S.—12.2 percent of Natives on reservations were missed in the 1990 Census compared with 1.2 percent of all people in the U.S.

To reverse this trend, NCAI partnered with the U.S. Census Bureau, the Leadership Conference Education Fund, and other national partners to create a nationwide public education and outreach campaign around the 2010 Census. The campaign also worked with grassroots partners to mobilize and provide support to tribal leaders to help them educate their communities about the importance of being counted by the Census.

Residents of Noorvik, Alaska, where the 2010 Census kicked off, were the first to proudly wear their t-shirts proclaiming “I’m Inupiaq, and I Count!”

Throughout the campaign, NCAI accomplished the following:

As the 2010 Census winds down, the Indian Country Counts campaign continues to move forward by working with the Census Bureau on the American Community Survey process, which has serious implications for Indian Country.

The Indian Country Counts campaign was made possible by the generous support of the Annie E. Casey Foundation, Bill and Melinda Gates Foundation, Ford Foundation, and the Open Society Institute. We thank them for their contribution to this important work. 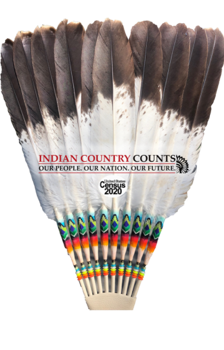 Time is short – request materials today for upcoming events! The following Census organizing materials are available to order through the select vendors.  If you have any questions, call NCAI at 202-466-7767 or email census@ncai.org.

To order the following items:

When you are ready to place your order please correspond via email to handfans@handfans-direct.com and reference job ID # 432973. Tribes/orgs will need to CC Beth Charley, bcharley@ncai.org and Saundra Mitrovich, smitrovich@ncai.org as we own the design and will need to send approval for its release. Shipping is uniformly priced as they use FedEx.